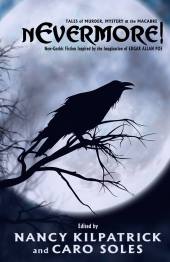 Barbara's first two crime stories appeared in the inaugural issue of The Ladies' Killing Circle in 1995, and from then on she was hooked. She loves short stories for their tight structure and pure economy of language, as well as the chance they give her to explore the extremes of storytelling.

In her short stories, she has travelled into the minds of teenage killers, comatose middle aged men, desperate junkies and unlikely heroes. Her numerous stories have been published in the Ladies Killing Circle and New Canadian Noir anthologies, as well as magazines such as Storyteller, Canada's Short Story Magazine. Over the years, she has had about thirty short stories published.

Among her stories is a series of historical tales set in 1870's Ottawa and featuring a young physician named Dr. David Browne, who is modelled loosely on the life of her great grandfather. So far, seven Dr. Browne stories have been published in various magazines and anthologies, including the latest, entitled "The Cauldron" about the dangers of Chaudiere Falls, which appears in the Summer 2009 edition of Ottawa Magazine. Four of her short stories (including two of the Dr. Browne stories) have been nominated for the Crime Writers of Canada Arthur Ellis Award, and two Dr. Browne stories have been prizewinners in Storyteller Magazine's Great Canadian Short Story Contest.

She regrets that she hasn't much time nowadays to devote to short stories, but hopes to get back to them soon. Her latest story appeared in the chilling anthology nEvermore! Tales of Murder, Mystery, and the Macabre, edited by Nancy Kilpatrick and Caro Soles, inspired by Edgar Allan Poe, and published by Edge Publishing in 2015. The story, entitled The Lighthouse, is set in wartime Newfoundland and is inspired by Poe's unfinished short story of the same name. Fog, lurking U-boats, and strange sounds in the night make for a spooky read. She in in impressive company with some of the world's top writers including Margaret Atwood. Details about the publication, release dates, and other authors are available here.