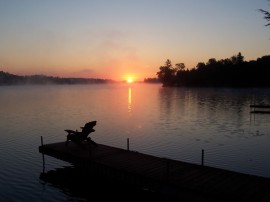 The Cedric O'Toole short novels are part of Orca Book Publishers' Rapid Reads series designed for the reluctant or emerging reader. Fast paced and easy to read, they have adult content and adult themes, so they are also perfect for someone looking for a quick and entertaining read for the airplane, doctor's office or just a lazy afternoon. So far, two of the three novels in this series have been shortlisted for the Arthur Ellis Best Novella Award.

Cedric O'Toole is a reluctant and unlikely hero who lives alone on a scrub farm trying to eke out a living as a country handyman. Although the setting is fictional, a discerning reader will detect a marked similarity to the Sharbot Lake area of Eastern Ontario, where Barbara has a cottage. This Muskoka chair on her dock in the photo is her favourite place to write. Sunrise her favourite time.

There are currently four novels is this series, which began with The Fall Guy in 2011. The third in the series, The Night Thief, hit the bookstores in Spring 2015, and the fourth, Blood Ties, in 2019. The country has a long memory and its own special kind of secrets. There are plenty more mysteries awaiting Cedric in future books!﻿

In the fourth Cedric O'Toole short novel, Cedris'c life is turned upside down

Shortlisted for Arthur Ellis Best Novel! Barbara is thrilled that None So Blind is nominated for the 2015 Best Novel Award.