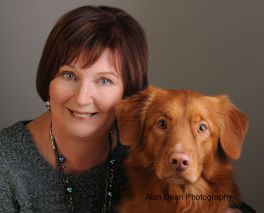 Amanda Doucette is an adventurous, passionate, thirty-something international aid worker who has returned to her home in Canada to recover her health and to chart a new path after a traumatic ordeal in Africa. Even while recovering, however, she can't turn away from the struggles of innocent people. Amanda is a powerful character who rides a lime green motorcycle and owns a Nova Scotia Duck Tolling Retriever based on one of Barbara's own.

There are currently four books in the series, with the latest, The Ancient Dead, released in January 2021. But final editing is complete on the fifth, Wreck Bay, set on Vancouver Island and scheduled for release in January 2023. As always, Barbara's interest in psychology, social justice and human rights informs both Amanda's character and the themes of the books. Each book in the series finds Amanda embroiled in adventure and intrigue in a different iconic Canadian setting as she crosses the country on a charitable tour. She is helped in her adventures by two committed friends–RCMP Corporal Chris Tymko and seasoned journalist Matthew Goderich.

Wreck Bay is up on NetGalley for interested reviewers until January 9. All four books to date are available in paperback, e-formats, and audio.