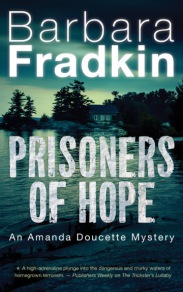 Georgian Bay is a spectacular terrain of granite shores, deserted islands, and infinite sparkling bays. As part of her cross-Canada charity tour, Amanda has planned a kayaking trip in the area for families from a poor rural Ontario community.  While exploring some remote islands offshore, she and a local tour guide rescue a frightened young woman whose boat has capsized in the lake. In an apparent act of kindness, the tour guide takes the woman to shore, leaving Amanda stranded on an island. But when news surfaces that a wealthy doctor has died on his island estate and his Filipino nanny has gone missing, Amanda fears far more sinister forces at work. When the young tour guide is found dead on a nearby island, she and RCMP officer Chris Tymko race to prevent more innocent deaths.